British Airways Will No Longer Promote Attractions With Captive Animals, Including SeaWorld, A BABY dolphin has died "mid-performance" at a Bulgarian water park after allegedly being "overworked"....

British Airways Will No Longer Promote Attractions With Captive Animals, Including SeaWorld

Corks are popping at PETA today after the announcement that British Airways has grounded ticket sales to attractions that keep wild animals captive, including SeaWorld. All facilities where captive wild animals are central to the attraction have been removed from its website.

For years, PETA has been asking the airline to cut ties with marine abusement parks. In addition to meeting with British Airways’ management, our efforts included encouraging almost 15,000 PETA members and supporters to contact the company.

“Our customers tell us they have concerns about wild animals being kept in captivity, and increasingly see animal performances in particular as outdated.”

British Airways’ pledge to stop offering tours that include animal rides or interactions positions it as a leader for animal welfare in the travel industry.

The documentary Blackfish exposed SeaWorld’s abuse of animals to the public. The company’s stock has tanked, and major US companies such as AAA have severed ties with its parks – as has the UK’s biggest travel provider, Thomas Cook Group, following a dedicated PETA campaign. Recently, Virgin Holidays joined the list – so why does TUI continue to offer its customers SeaWorld ticket deals?

At SeaWorld, orcas live in cramped concrete tanks and are deprived of everything that’s natural and important to them. With no physical, psychological, or emotional stimulation, they spend their days swimming in endless circles.

At least 41 orcas and dozens of other dolphins have died at SeaWorld parks from causes including severe trauma, intestinal gangrene, and chronic cardiovascular failure.

The images are hard to look at, but they cannot be ignored. Every year the blood of more than 800 dolphins and whales turns the waters of the Faroe Islands red. These intelligent animals are lured into shallow waters where they meet a brutally violent fate.

Like something out of a horror movie, imagine as a mother whale has a hook plunged into her blowhole. She is then dragged to shore to have her head sliced nearly off. Her calf is left to fend for itself in the middle of the bloodbath. This is what is happening to these innocent animals.

They are horrible details, but with your help, it can end. You can join the international community and those using Change.org to end the annual slaughter.

Kanul launched his petition as a way to save these innocent whales. With the support of people like you, the petition is bringing greater attention to this tragic international story. And it couldn't have come at a more important moment. Whether 800 more dolphins and whales experience such a horrific death during the next festival depends on what we do now and in the coming months.

There is so much to do and you can help. Our team is working to get more media for Kanul’s campaign and make sure it grows in support. With increased momentum, leaders won’t be able to ignore the international cries to end the hunt. These efforts are funded by people like you –  Americans who are passionate about ending animal cruelty and creating lasting change. Change.org Animal Protection Members make this work possible.

A BABY dolphin has died "mid-performance" at a Bulgarian water park after allegedly being "overworked".

The animal was just nine days old when it passed away at the Varna Dolphinarium, local media reports. 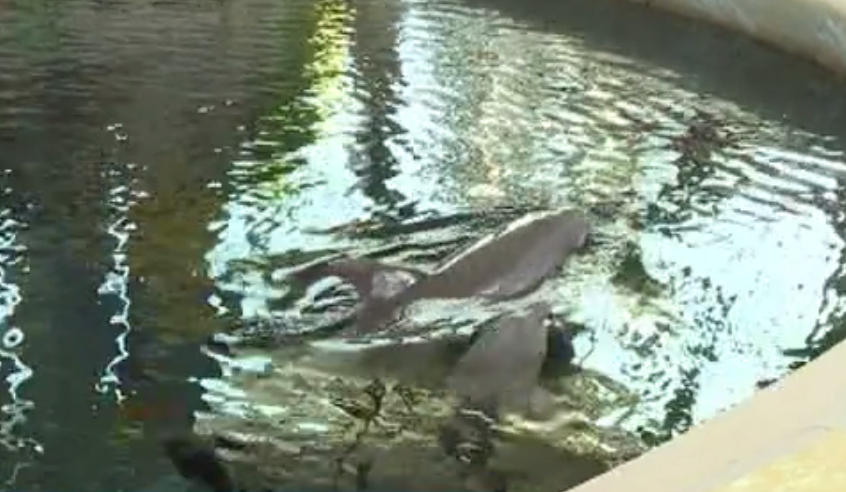 The tiny creature is said to have died in front of a packed audience, with spectators describing staff hurriedly ushering them out of the arena.

One audience member Bisser Lyubenov told BTV Novinite: "There was a disturbance, the dolphins stopped playing and performing tricks."

It's not clear what exactly the baby dolphin died of, but critics have blamed conditions at the dolphinarium.

Dolphins at the park are forced to perform four times a day during the busy summer peak season, when tourists flock to the park.

And despite its young age, the baby dolphin was forced to perform with the adults, it is claimed.

Facebook users slammed the attraction, branding it a "torturer" for allegedly overworking the animals.

Yavor Gechev from the animal protection organisation Four Paws told BBC News five dolphins and a seal have died at the park over the past five years.

He said the grisly death count was well above average, adding: "This means categorically that conditions don't meet even the minimal standards for keeping such animals.

"The animals are struggling there, they are not surviving." 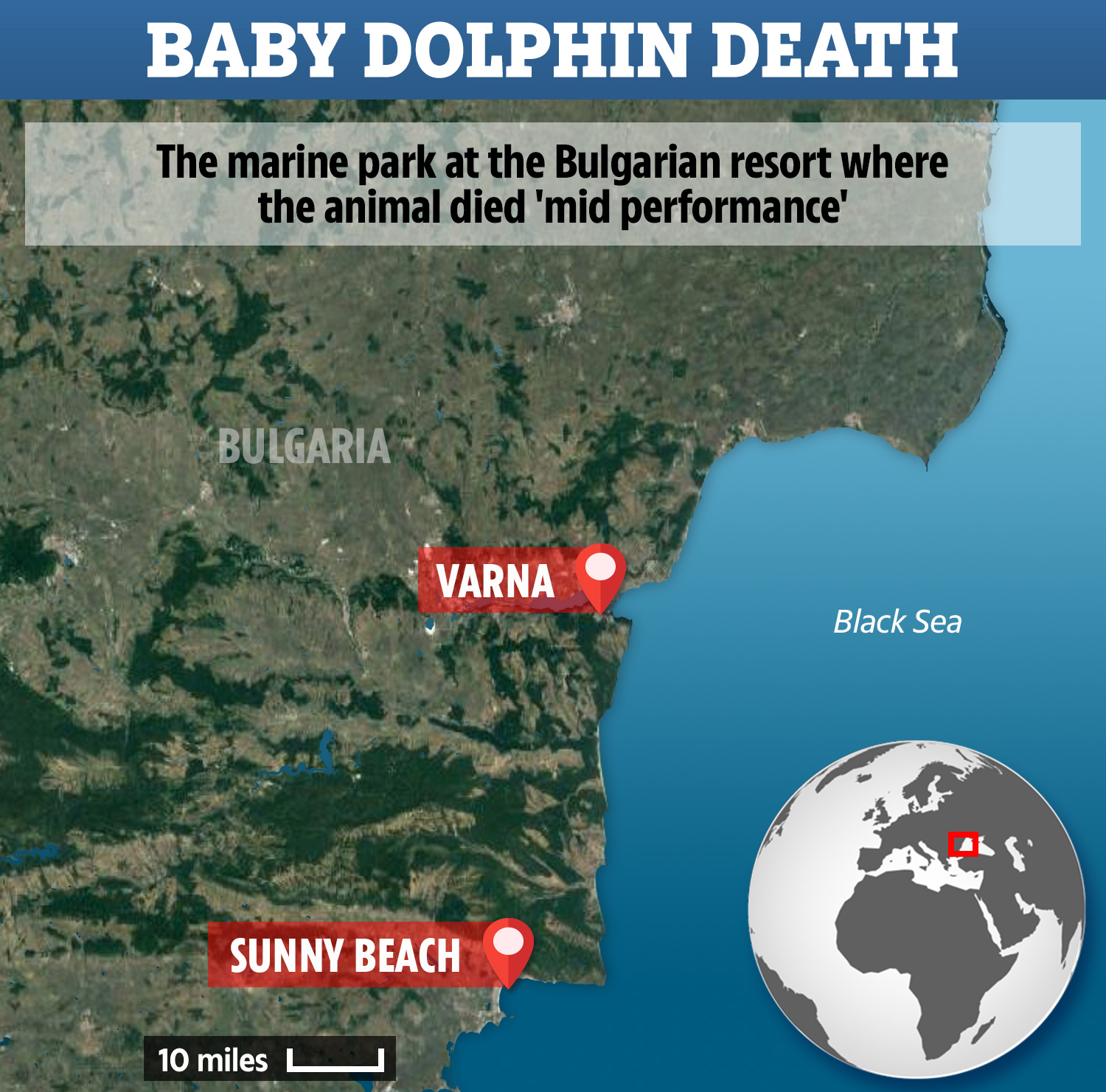 But officials there hit back in comments to local media, denying the death happened in front of a live audience.

Tsvetan Stanev, the facility's biologist, said: "A baby dolphin taking part in performances nine days after it was born - this has never happened in this dolphinarium!"

Entangled and pierced by massive hooks left soaking in the water for hours on end, a dolphin struggles beneath the surface for air. Bleeding from puncture wounds, the dolphin drowns, exhausted and unable to fight any longer.

She’s hooked on a pelagic longline, a fishing gear that can stretch up to 60 miles with thousands of baited hooks, and is especially deadly for animals like dolphins and whales that, once hooked and entangled in the lines, can’t surface for air.

This horrific scene plays out time and time again just outside of U.S. waters off the West Coast, where pelagic longlines are still permitted. Now, deadly longlines could come roaring back to U.S. West Coast waters after an over 40-year ban if federal officials permit it, and it’s on all of us to ensure that doesn’t happen.

Your Oceana membership helps us pressure key decision makers to do the right thing for dolphins and our oceans. The Pacific Fishery Management Council and the National Marine Fisheries Service regulate U.S. West Coast fisheries and the types of fishing gear permitted for use. If we fail, these key federal decision makers could overturn the long-held ban on pelagic longlines – meaning more dead dolphins. Not on our watch!

There is absolutely NO reason to welcome deadly pelagic longlines back into West Coast waters, especially when federal officials continue to delay efforts to phase out equally destructive drift gillnets. Drift gillnet fisheries targeting swordfish on the U.S. West Coast kill more dolphins than all observed West Coast fisheries combined. We’re not campaigning to get rid of one problem just to switch to another when we have a simple, proven solution.

Deep set buoy gear is a sustainable, profitable alternative to both drift gillnets and pelagic longlines for catching swordfish and has never had a known fatal interaction with dolphins, whales or sea turtles. We just have to make the switch. And we are urging fishery managers to do just that.

But to keep our proven work going – and save dolphins like the one above – we’re counting on you to stand with us today.

These next few months are critical for the future of West Coast swordfish fisheries.