Orcas do NOT belong in Tanks, Mega Still MIA, Law Suit for Belugas, 72 Remain at A Whale of A Week!

Late last year Action for Dolphins joined hundreds of people outside Marineland Antibes to protest the rumoured transfer of their four orcas to China.

The protest was organised by One Voice and Groupe Anti-Captivite. The enormous crowd drew national media attention and following the protest Marineland put out an official statement saying they would NOT be moving their orcas in 2020. This is a big win for the orcas, and for everyone who joined the protest. Transfers are traumatising for the animals, which are kept in small dark boxes for hours on end. 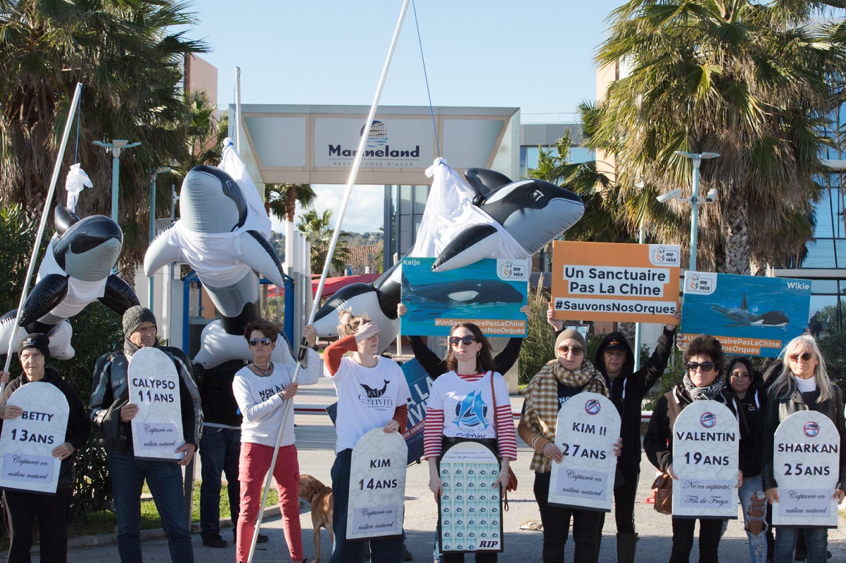 Action for Dolphins standing with protesters outside Marineland Antibes.Despite the good news, we are worried Marineland Antibes might consider moving their orcas next year. And even if the orcas stay in their current tanks, they face a lifetime of misery performing circus tricks in daily shows. That’s why AFD is working on a campaign to end the cruel cycle of captivity in France. Can you help, and support the movement to stop more orcas being bred into tiny tanks in the name of entertainment?Please click here to help fight orca captivityTo start with, AFD has written to Marineland asking them to do the right thing and retire their orcas and dolphins to a sanctuary. We’ll be in touch soon to give you an update with what comes next. But in the meantime, thank you for being part of the solution to this cruel and out-dated practice.

Another endangered orca is presumed dead. Mega, as he was known, was the father of many of the population's young orcas. His loss brings the number of orcas in the Pacific Northwest down to just 72. Please help the Wildlife and Wild Places Defense Fund. Your help is needed if we're going to keep these orcas from going extinct. Three other orcas were presumed dead last summer, and every death makes the orcas' future more uncertain. That's why we're ramping up our battle for them this year. To ensure more orcas don't starve, we'll be fighting for removal of dams along the lower Snake River. Breaching these dams will help the salmon population grow, which in turn will help keep orcas alive. This latest fight builds on our legal work to reduce the harm done by Pacific salmon fisheries and to protect these orcas from underwater noises that interfere with their ability to communicate and find food. Hope for the species remains: A calf born last year was recently seen alive. Because of the high mortality rates of newborns, making it past the first year is a critical milestone. We can't let orcas disappear on our watch. So we're fighting on all fronts to save them. Every hour of every day we lose one species to extinction. The planet is becoming lonelier as plants and animals disappear. West Coast orcas are among the most endangered mammals on the planet, and they need our help now. This is urgent, vital work — so please, give today to the Wildlife and Wild Places Defense Fund.

Mega, also known as L41, is a vital member of the critically endangered Southern Resident orca clan, and he is nowhere to be found. Last time observers spotted Mega, he was frighteningly thin. Now, experts fear he is dead.

New government data reveal a dramatic decline in Alaska's endangered belugas, down to just 279 animals in Cook Inlet. That's why the Center for Biological Diversity and allies have notified the Trump administration we intend to sue over its approval of oil exploration in the white whales' home. The feds relied on higher beluga numbers in 2019 when giving the green light to Hilcorp Alaska to harm these whales (and other animals) as it expands oil and gas operations in the inlet. Our notice says the company must consider the new, smaller numbers and much steeper rate of decline. "The Trump administration needs to stop handing out permits for the fossil fuel industry to blast, pile drive, and drill in Cook Inlet," said the Center's Julie Teel Simmonds. "These animals are hanging on by a thread. We have to protect them and give them some peace." Read more in the Anchorage Daily News and consider making a gift supporting our work to protect belugas and other wildlife from oil and gas exploration.

Center Op-ed: How to Help Washington's Whales and Salmon

The endangered West Coast population of orcas is down to as few as 72 individuals. One of the main threats to their existence is the decline of the salmon they eat. That's why, writes Center attorney Sophia Ressler in a new op-ed, Washington's lawmakers must implement common-sense measures to protect salmon populations. One way to do that? End destructive hobby gold mining in salmon-spawning rivers and streams. Read the op-ed.